Jones is not a magician or a trickster, so you do not have to fear. He just likes probability puzzles. He shows you his deck of three cards. One is blue on both sides. A second is blue on one side and red on the other. A third is red on both sides. Jones shuffles his deck, draws a random card (without looking), selects a random side of it (without looking) and shows it to you. What you see is a blue side. What do you think the probability is that the other side, which you presently do not see, is blue as well?

Many people believe that the chance that the other side of the card is blue is .5; that there is a 50/50 chance of either color on the back. After all, there are six sides in total, half of which are blue, and since you do not know which side is on the back, the odds are equal for blue and red. 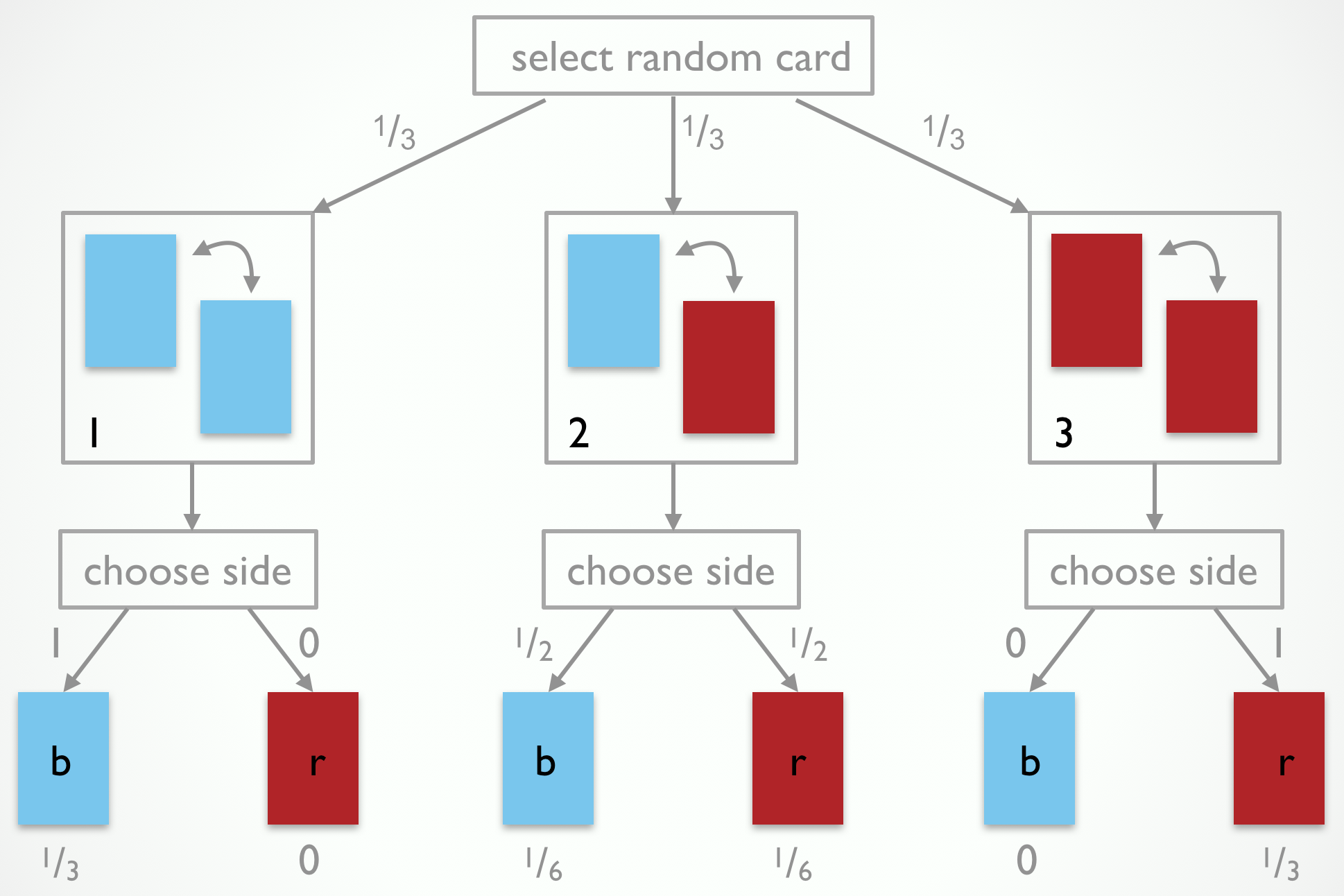 Fig. 1: The observation-generating process for the 3-card problem. Jones selects a random card, then chooses a random side of it.

If we combine our knowledge of the observation-generating process in Fig. 1 with the observation that the side shown was blue, we should eliminate the outcomes that are incompatible with it, as shown in Fig. 2. What remains are the probabilities assigned to branches that are compatible with our observation. But they do not sum to 1. If we therefore renormalize (here: division by .5), we end up believing that it is twice as likely for the side which we have not observed to be blue as well. The reason is because the blue-blue card is twice as likely to have generated what we observed than the blue-red card is.

Fig. 2: The observation-generating process for the 3-card problem after eliminating outcomes incompatible with the observation 'blue'.

The latter reasoning is actually an instance of Bayes rule. For our purposes, we can think of Bayes rule as a normatively correct way of forming (subjective) beliefs about which causes have likely generated an observed effect, i.e., a way of reasoning probabilistically and defeasibly about likely explanations for what has happened. In probabilistic pragmatics we will use Bayes rule to capture the listener’s attempt of recovering what a speaker may have had in mind when she made a particular utterance. In other words, probabilistic pragmatics treats pragmatic interpretation as probabilistic inference to the best explanation of what worldly states of affairs, mental states and contextual factors would have caused the speaker to act in the manner observed.

You should now feel very uncomfortable. Did we not just say that most people fail at probabilistic reasoning tasks like the 3-card problem? (Other prominent examples would be the two-box problem or the Monty Hall problem.) Yes, we did. But there is also a marked contrast between probability puzzles and natural language understanding. One reason for why many people fail to show the correct probabilistic reasoning in the 3-card problem is because they neglect the precise nature of the observation-generating process. The process by which Jones selects his cards is not particularly familiar to us. (When is the last time you performed this card selection procedure.) In contrast, every speaker is intimately familiar with the production of utterances to express ideas. It is arguably a hallmark of human language that we experience ourselves in the role of the producer (compare Hockett’s design features of language, in particular total feedback). On this construal, pragmatic interpretation is (in part) a simulation process of what we might have said to express such-and-such in such-and-such contextual conditions.

Consider the example of a 2-dimensional probability table. It gives probabilities for meeting a person with a particular hair and eye color.

For example, the conditional probability of a person to have black hair given that she has green eyes is:

Bayes rule is most useful for abductive reasoning to the best explanation of an observation (effect) based on some unobservable cause. Consider the 3-card problem again. We would like to infer which card Jones selected based on what we saw (i.e., only one side of it). In other words, we would like to know the conditional probability of, say the blue-blue card, given that we have observed one blue side: \(P(\text{blue-blue} \mid \text{obs. blue})\). What we have is an observation-generating process that specifies the reverse, namely the conditional probability of observing blue or red, given a card. Formally, we would get:

To implement Bayes rule in WebPPL we need to specify the observation-generating process. The following function generates a single observation for the process by which Jones selects and shows a card.

To obtain the conditional probability of a card given that we observed blue, we need two special-purpose constructions in WebPPL. First, we add which event to condition on with the condition(...) function. Second, we use Infer to pick up all the relevant information (including condition(...), which is only allowed in conjunction with Infer), and to return the posterior distribution, by Bayes rule.

Exercise: Implement Bayesian reasoning for the 2-box problem in WebPPL. Jones has two boxes. One contains two gold coins, the other one gold and one silver coin. Jones selects a random box and picks a random coin from it. He shows you a gold coin. What is the probability that the other coin in the box from which Jones presented the gold coin to you is also gold?